In response to the huge challenges Heritage and Craft makers and businesses are facing at present, The Radcliffe Trust has made a grant to The Crafts Council for a hardship fund.  The fund launched on 17th June 2020.

The Crafts Council has consulted with Icon, the Heritage Crafts Association and The Guild of Master Craftsmen, amongst others, to ensure the funds are widely distributed.  The Crafts Council gave directly to makers, in the form of £500 bursaries, who could not access other Government schemes.

The Trust was also particularly keen to ensure that Black, Asian and minority ethnic (BAME) makers were aware of the scheme and applied if appropriate.  The Crafts Council developed a promotional strategy including a number of partner and intermediary organisations, such as Shades of Noir, to ensure that applications from BAME makers were encouraged.

A commemorative plaque, paid for by The Radcliffe Trust, is now installed on the wall of the Old Radcliffe Infirmary.

A ‘socially distanced’ unveiling took place in May 2020, and a more formal event is planned for when lock-down restrictions are eased. 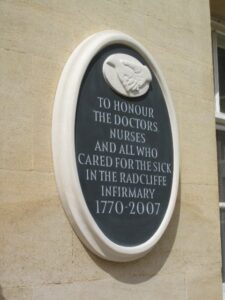 The Radcliffe Trust is proud to be partnering Wigmore Hall in an important series of chamber music commissions.  Initiated as part of our Tercentenary, the series fell naturally into two parts, the first comprising six new string quartets; and the second, a quartet, sextet, and octet commissioned from 2016 through to 2019.

The composers are British, some well-established and some relatively early in their careers, and the performers chosen from amongst the leading chamber musicians of our time.  All nine new works will be premiered at Wigmore Hall.

The commissions were conceived to reflect the Trust’s long-standing interests in both chamber music and composition, and to look to the future with the creation of an important addition to the chamber music canon.

As well as adding significantly to the string quartet repertoire, it is hoped that the commissions will act as “companion pieces” to already-established chamber works for larger ensembles.  By so doing, the new works stand a good chance of finding regular performances in the future.

The series started with a new composition by Mark-Anthony Turnage which was co-commissioned by Wigmore Hall, The Radcliffe Trust and NMC Recordings.

The following performances were premiered at The Wigmore Hall and recorded by the NMC:

The NMC has already released the first volume of these recordings, titled “Bracing Change”, which includes the compositions of Simon Holt, Donnacha Dennehy & Anthony Gilbert.

A further two albums are scheduled to be released in Spring 2020 and Winter 2021.

The final event of the Commissioning Series will be on 10th July 2021 at Wigmore Hall, performed by Heath String Quartet.  It will be the European premiere of the Helen Grime quartet composition.

The statue of Dr John Radcliffe at Green Templeton College, University of Oxford

The 25th September 2018 marked the unveiling of the statue of Dr John Radcliffe, situated at Green Templeton College, Oxford.

Martin Jennings is a well-known and celebrated sculptor, having created works of many famous people including Mary Seacole, situated outside St Thomas’ Hospital; Charles Dickens in Portsmouth; and George Orwell outside Broadcasting House.

The unveiling was a huge success with individuals from both The Radcliffe Trust and Green Templeton College there to celebrate this fitting new display. Felix Warnock, the Chairman of The Radcliffe Trust at the time, reflected on Dr Radcliffe’s legacy and how it remains relevant today. You can read his comments here.

This statue was commissioned as part of the commemoration of the Tercentenary of The Radcliffe Trust, together with:

For more information about the unveiling of the statue of Doctor John Radcliffe, please use the following links:

The Oxford Mail :  John Radcliffe is honoured with bronze statue in Oxford