In 2014-2015 The Radcliffe Trust commemorated the 300th anniversary of its establishment by Dr John Radcliffe of Oxford.  As part of its Tercentenary, the Trust celebrated the achievements of the many extraordinary organisations and individuals it has supported over the years with the Balfour of Burleigh Tercentenary Prizes for Exceptional Achievement in Crafts.

These prizes were named in honour of Lord Balfour of Burleigh who retired as a Trustee in 2014 after 40 years’ distinguished service to The Radcliffe Trust and, in particular, to the Trust’s Heritage & Crafts programme.  Sadly, Lord Balfour died on 18th September 2019 and is greatly missed by fellow Trustees and many in the Heritage and Craft sectors that he so loved. 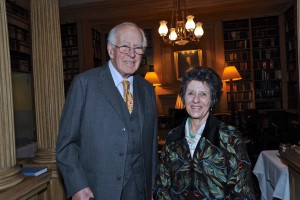 We received a wonderful response to this call.  All the letters spoke of excellence and expressed the exceptional dedication, skills and achievements of the individuals concerned in all fields of crafts and conservation.  They also spoke with moving warmth and respect of their colleagues. This was a tribute both to the individuals and to the organisations who have supported and nominated them.

Given the very high standard of the nominations, the Trustees recognise that to have received a nomination constitutes, of itself, an outstanding distinction and all nominees have received certificates of excellence to mark their achievements. In addition to this, a number of special prizes were presented in person by Lord and Lady Balfour at a celebratory dinner held in London on 24th November.  Sir Christopher Frayling was our special guest and toasted the health of the Radcliffe Trust as it moves into its fourth century of operations.

The Radcliffe trustees offer their thanks to the nominating bodies and their sincere congratulations to all nominees and prize winners.