Thanks to support from the Radcliffe Trust, Aimée Bou Rizk, Museum Assistant at the Archaeological Museum at the American University of Beirut (AUB) was selected to undertake a training opportunity as part of this project. Aimée spent three months at the British Museum gaining experience in glass conservation, preventative conservation, object assessment and documentation alongside the Museum’s conservation team. She also received training and advice for setting up a conservation studio at AUB, making an important contribution to Lebanon’s heritage sector.

On 4 August 2020, a massive stockpile of ammonium nitrate exploded at the port of Beirut. The blast killed at least 218 people, injured 7,000 and displaced 300,000 as well as causing $15bn of damage and covered the city with shards of shattered glass. The immediate and lasting effects have been deeply traumatic, not just for Beirut’s citizens but for all Lebanese people.

Situated 3.2km from the port, the Archaeological Museum at the AUB was one of the many cultural institutions affected. A case displaying 74 Roman, Byzantine and Islamic period glass vessels was smashed against the floor, mixing thousands of shards of ancient glass with fragments from the glass case and surrounding windows. 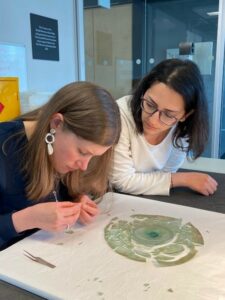 Following the disaster, the British Museum offered assistance to AUB, who requested help to conserve eight vessels that had been identified as being able to be reconstructed and sturdy enough to be safely transported to London where work would be carried out. A collaborative project was initiated which aimed to conserve these eight vessels, carry out scientific analysis to provide information about their material composition to identify their place of manufacture and offer a training opportunity for a Lebanon-based museum professional.

Staff from AUB worked with British Museum conservators for three months to conserve the eight vessels during a process which saw the fragments carefully and laboriously sorted and the individual vessels sensitively and painstakingly reconstructed. The team purposefully made the joins between the shards visible and, though some of the missing areas were filled to support the surrounding fragments, others were left unfilled. These visible scars and missing fragments bear witness to the explosion and the determination of the people of Lebanon to recover.

The restored vessels were displayed in The Asahi Shimbun Displays Shattered glass of Beirut at the British Museum from 25 August to 23 October 2022. The British Museum and AUB are now preparing for the return of the vessels to their home in Beirut in early 2023. 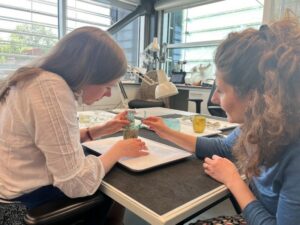 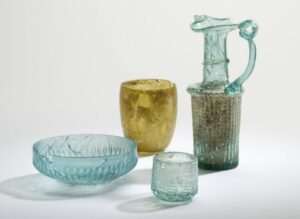